Are Ex-Students Doubtful of Principal Selection Process of Nepal’s National...

Expressing dissatisfaction over the selection process, a former student of the school, Santosh Shah from Barthawa-8, Sarlahi has asked the Ministry of Education, Science and Technology for detailed information on Thursday. 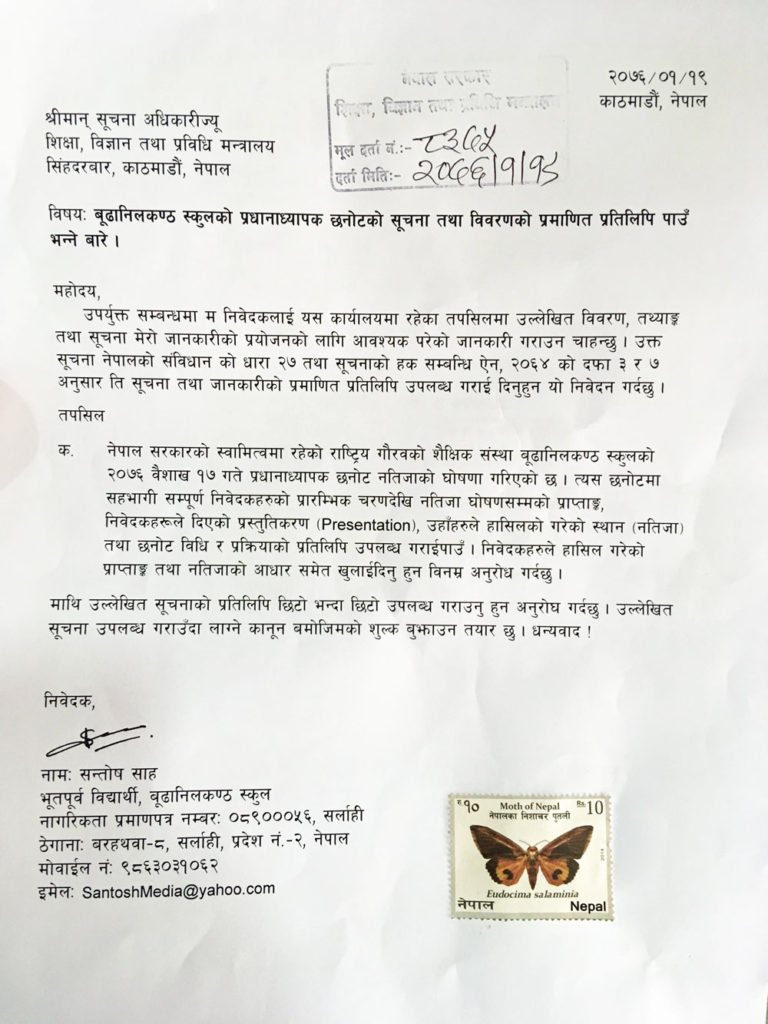 Shah used the Nepali Constitution’s article 27 and the law regarding right to information of 2064’s clause 3 and 7 to register the letter at the Ministry of Education, Science and Technology in Singhadarbar, asking the information commissioner for such information. He said he asked to know the scores of all the applicants that participated in the selection from beginning to the end, the candidate’s presentation, the ranking they received, the selection process and mechanism and the basis of the scoring and selection.

He said aside from attending the school himself, it is an institution of pride nationwide and under the ownership of the Nepali Government so for public interest he requested for said information.
The result of the election of the principal of Budanilkantha School was announced on 30th April 2019.

Topic: Request to access the attested official copy of information and details of the selection of the Principal of Budanilkantha School.

Respected personel,
In regards to the topic, I, as the applicant am requesting access to the referred detailed and official attested copy of the information for my informational purpose. Abiding by the Nepali Constitution’s article 27 and the law regarding right to information of 2064’s clause 3 and 7, I am requesting a copy of this information as attested proof.
Details:
a. An institution bringing pride nationwide and under the ownership of the Nepali Government, Budanilkantha School announced the result of its selection of the Principal on 30th April 2019. I am requesting to know the scores of all the applicants that participated in the selection from beginning to the end, the candidates presentation, the ranking they received, the selection process and mechanism. I humbly request to know the basis of the received.

I am requesting for the detailed information mention above at the earliest. I am willing to pay the legal fees applicable in accessing the information. Thank you!

Santosh Shah is the president of Leadership Academy, a non-profit organization that works in collaboration with grassroots, national and international partners to run alternative education programs for high school and college students with major focus on girls and young women. Since 2000, Santosh Shah has mentored more than 3,000 students from all over Nepal, in leadership, communications and media skills, among them 75-80% girls. Currently he is constructing an agriculture vocational school in Bhaktapur, where village girls will be provided with 1-month of vocational education in organic and herbs farming, with major focus on financial literacy, i.e. having a bank account as well as applying for a farming/business loan and finding market for their produce. This will provide incentives for parents of young girls to keep their girls in their farm, hence their village. Shah has published article on gender equality and is producing “Nepal’s 75 Women Leaders” TV show to feature success stories of women leaders from across the nation. He is also the host of award-winning foreign affairs talk show – Power Talks, and is a judge on the reality shows – Nepal’s Top 7 Debaters & Nepal’s 5 Future Leaders.