Nepal Youth to the Government: “Lying Down Against Downing Lies”

The youth have been the active agents of change in recent history in such grave issues as gun control in the U.S. and climate change world over. Nepali youth too have come out to display their frustration against what they perceive has been the most inept mishandling of the COVID-19 pandemic in Nepal.

After taking to the street for what was meant to be a single day of protest to urge the government to increase the PCR testing and better quarantine facility, the street protests have kept going for three weeks now. Because of the suppression tactic used by the government on the first day, by using baton and water sprays, more youth joined the second day and then it spread to other major cities of Nepal. 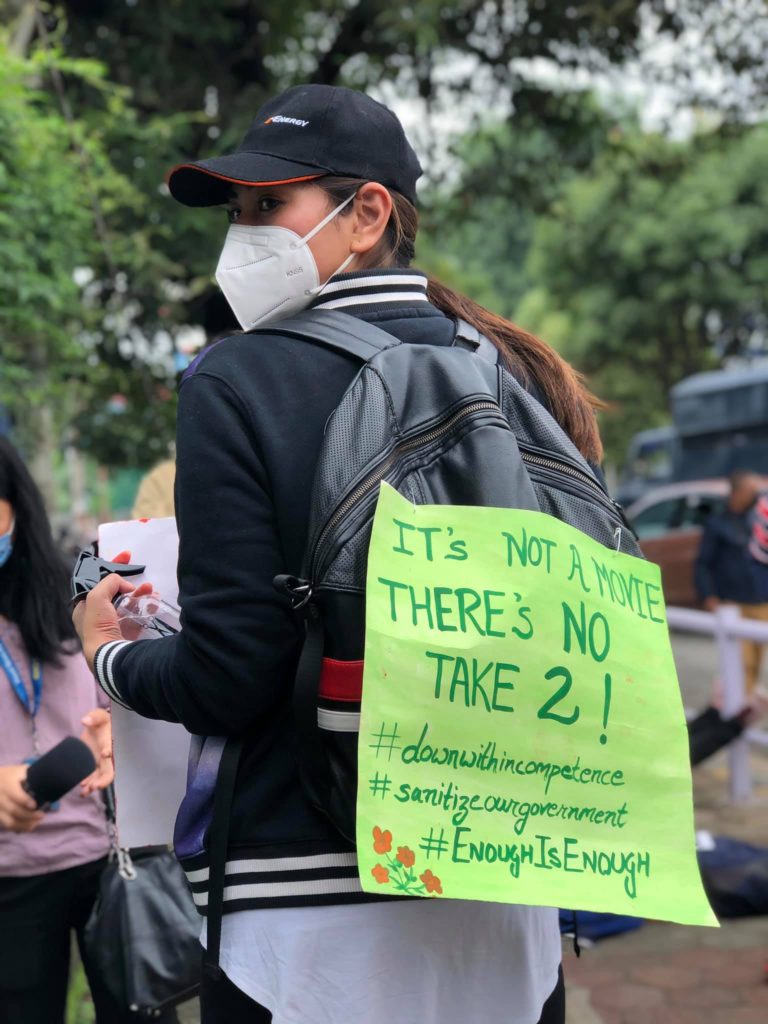 Read: Youth Protest Has Started, Signs It Will Get Bigger

Now their dissatisfaction has grown in everything the government is doing and saying. Their concern also asks for safety for women in the quarantine because women have been sexually abused in them. When the PM came out with his light-hearted comment to take corona as a simple fever and cure it with hot water, garlic and turmeric, the youth have responded appropriately. This time they are lying on the sidewalk around Sahid Gate, the heart of Kathmandu and displaying placards mocking the turmeric cure. Some youth even put turmeric power all over them and displayed the sign, “When are you going to act?” 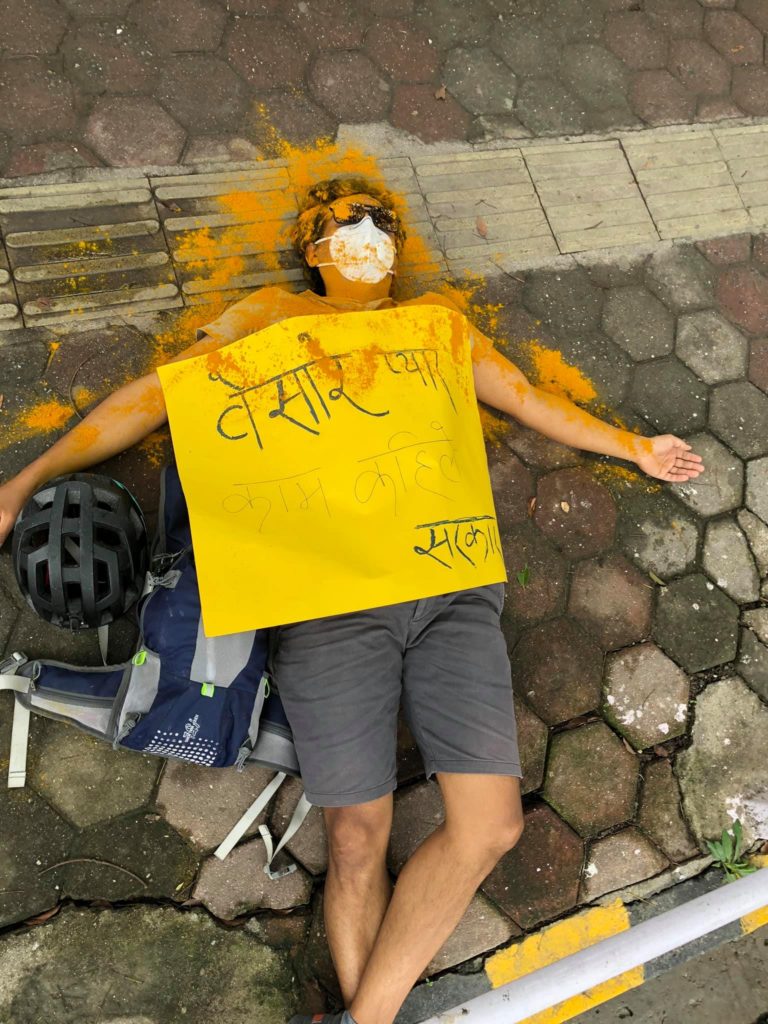 One such indefatigable youth is Mr. Lama, a trekking guide and wilderness first responder from Kathmandu.  Their aim is absolutely not political. “It is a do or die situation,” he told Nepalisite.  It is a self-motivated movement of youth of Kathmandu to alert the leaders. While it is non-political, it is open to anyone who harbors love for the nation and wish to be heard, and join the movement. 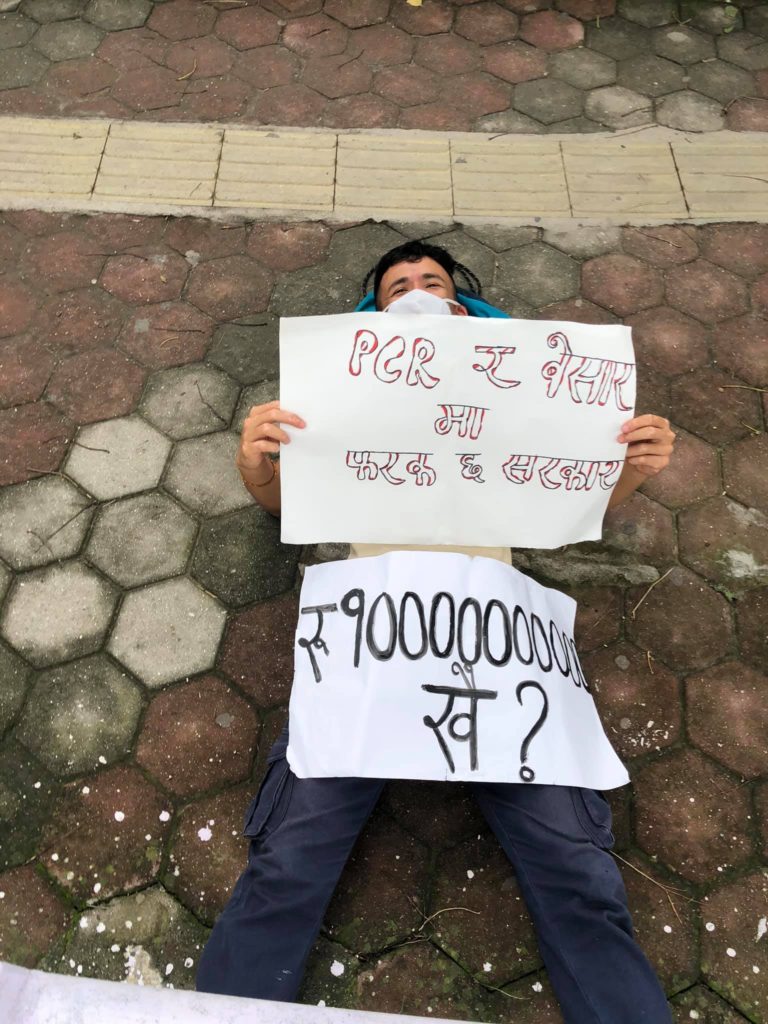 It has been called a “leaderless” movement, and “the agenda” is itself a leader, according to Mr. Lama. The frustration has crossed the limit hence the youth has found only this as their means to show their dissatisfaction.  They want the government to realize that they have bungled in their response, and the urgent need to be serious. They want 100% PCR testing, and no RDT at all. 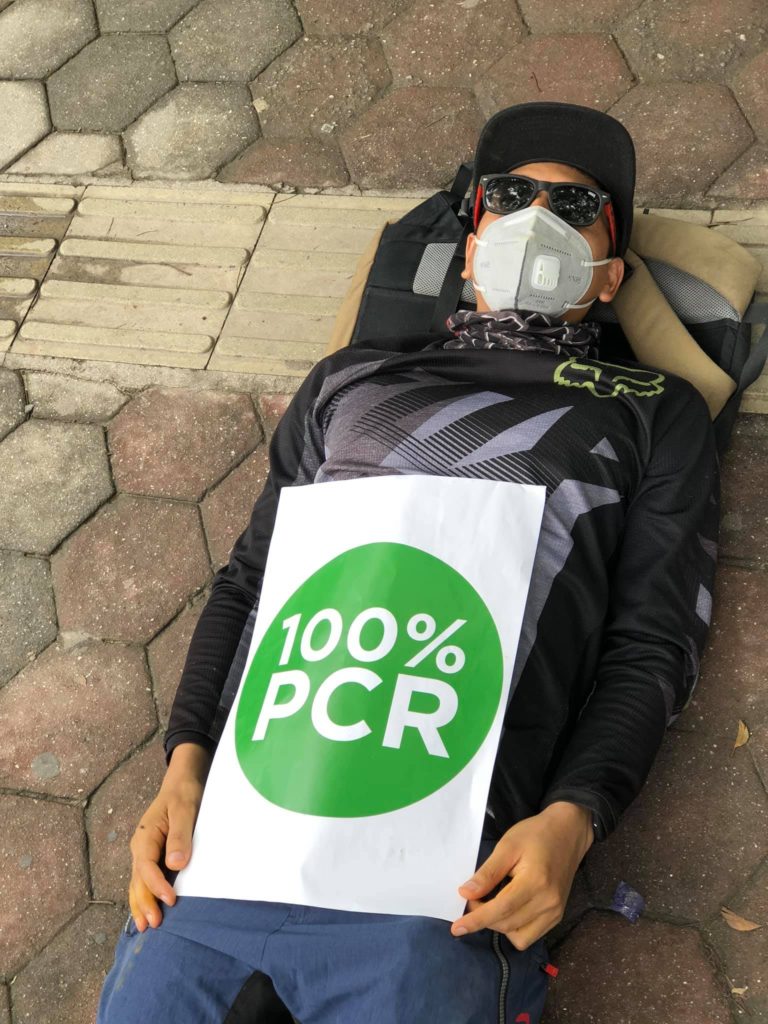 Mr. Lama further said that the reason they lied down on the pavement is to send a message how serious the situation in Nepal is becoming. “There could be dead bodies from COVID-19 all over Nepal soon”, he added. 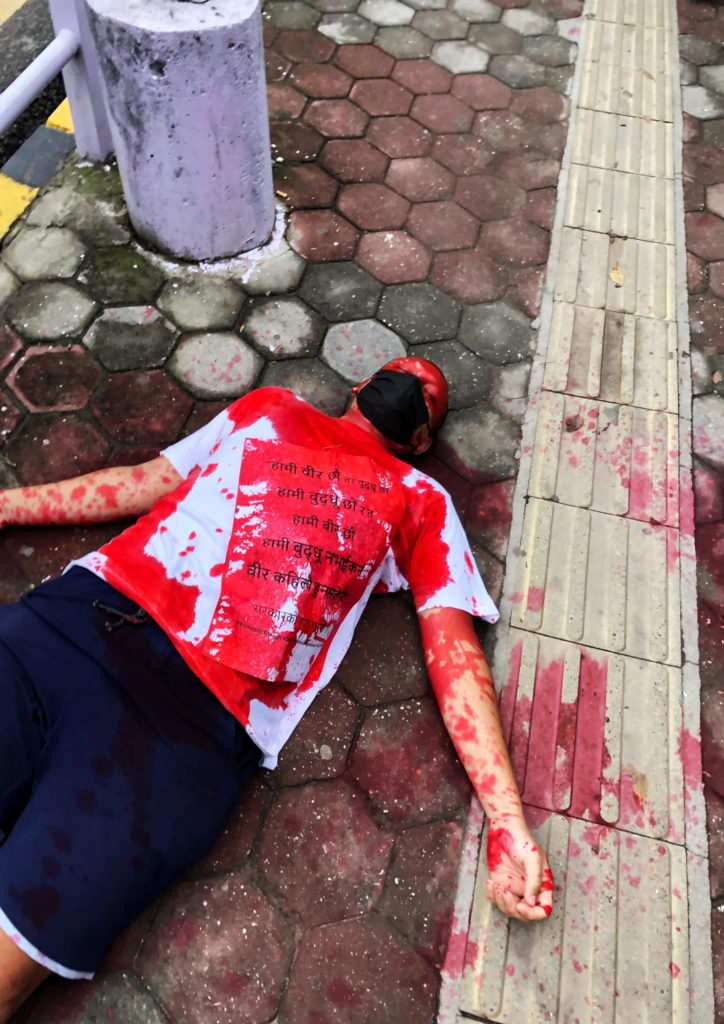 Looking at the exponential rise in the infection, the returning of Nepalese stranded abroad and still the corruption-plagued government response, the youth have absolutely identified the coming danger. Hence this is their way to show the love for their country by doing the right thing, despite government threat to imprison and impose fine.  If anyone want to learn more, they have a Facebook page: Covid-19 Nepal: Enough is Enough!

Here are some more photos from the protest provided by Mr. Lama. 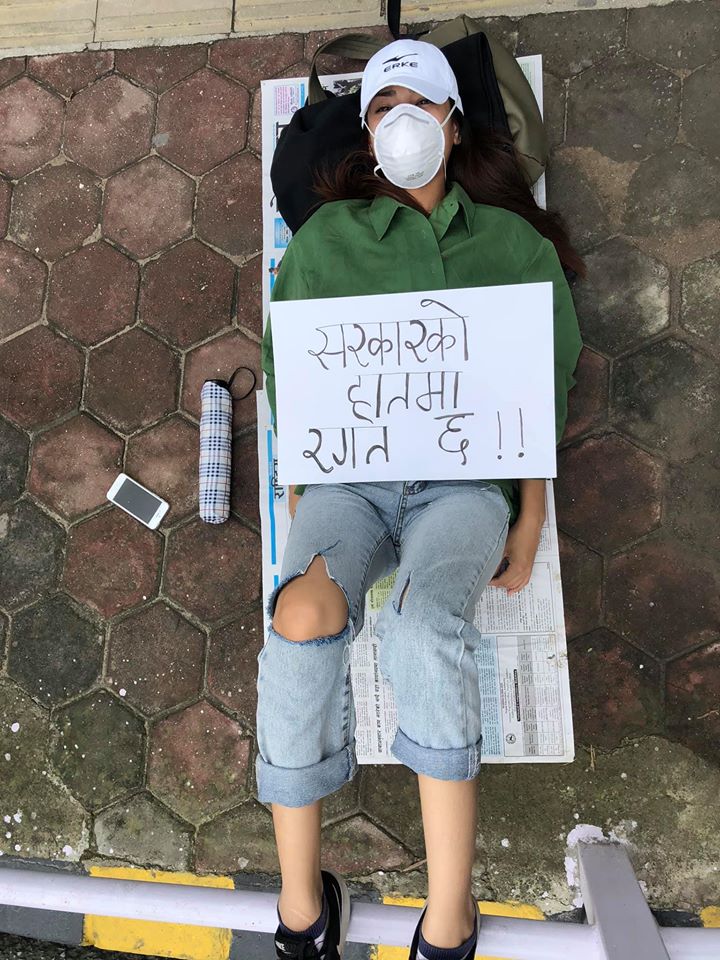 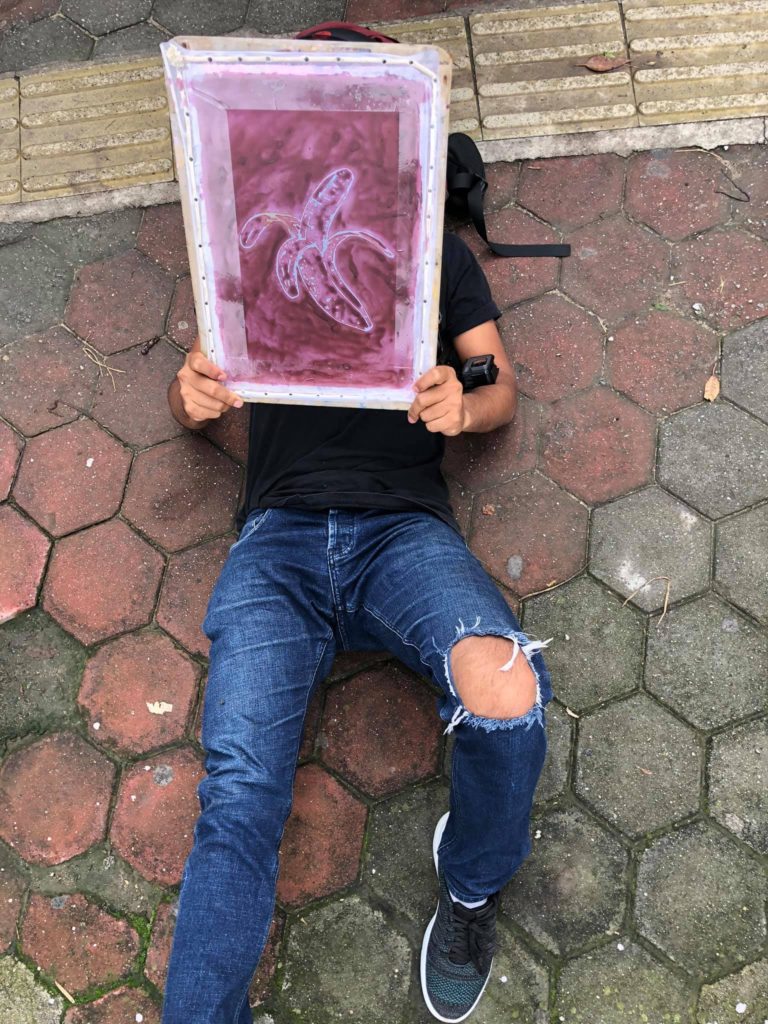 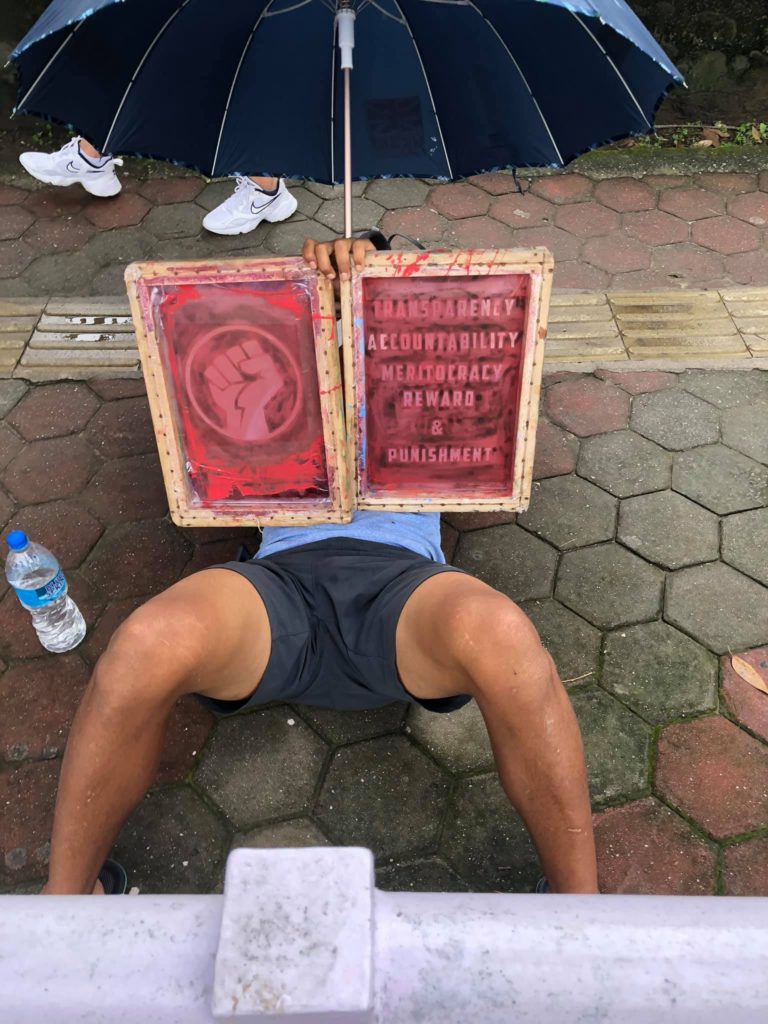