Nepal: Youth Protest Has Started, Signs It Will Get Bigger

There is a rage growing against the government. In fact, it is not only against the government’s total incompetence, but all others things that are happening that have broken people’s trust.  One youth came on YouTube channel and bluntly told that the limit of tolerance has crossed. He is right.

He was expressing his dissatisfaction at the way the police brutally squashed the peaceful protest organized by the youth of Kathmandu outside PM office in Baluwatar. Without any warning, sudden batton charge and water canon were unleashed on the silently sitting protesters.

They were mainly dissatisfied with the corona response of the government and total mishandling of it in every aspect. From the initial corruption regarding the purchase of the medical equipment by Omni group to the current daily skyrocketing infection number, Nepal government has acted in bad faith. They just told us that Rs. 10 b has already been spent.

We are de"central"ising and de"idol"ising our protest so that ALL and ANY NEPALI CITIZEN will be to organise and carry out these peaceful "demonstration of dissatisfaction" !! alredy protest has beec carried out in Baluwatar , Dhangadi , Biratnagar and now in Gwarko lalitpur by youts of those areas , you can organise such events too !! just msg us and ur details and we weill provide u with the banners and resources !! just make sure that we will entertain no political agendas , no hate or anti governemt chants , all slogans to ask governemt to buccle up and do their part , wile maintaining Social distance and not allowing trasmission of disease !! yesto sansar ma kasaile kaile pani gareko chaina , we are setting an example , lets keep the momentum running #saveNepal #citizensForNepal #downwithIncompetence #attiBhayo #janataForJanata #powerToThePeople

Posted by PhotoKhichuwa on Wednesday, June 10, 2020

Now, following the lock down that has lasted for more than two months, business people are feeling the pinch. As if to add fuel to the fire, the finance minster ordered the business to submit their taxes before the usual scheduled time. While the business community has been reeling from the loss of revenues, and increasing expenditure, there has been no indication that things could get better.

People were expecting that lockdown would quiet down in two months, looking at the example of China. Instead, in Nepal, things have been going the other way. Now, the infection total in Nepal has crossed five thousand, and the quarantines are becoming the nursery of spreading new infections.

Having been tired of the government lack of transparency, youth of Kathmandu gathered around the Baluwatar PM residence with placards to show their displeasure and put up their demands for increasing more PCR testing, not RDT. There have been other serious issues that have irked the people.

The people asked the government to show the results, not the Rs. 10 billion reported to have been spent. Opposition political parties are also asking for the government to be transparent about that figure. In response, the PM’s response is not to worry about the transparency at all, and focus on the virus.

On the surface, what was happening was according to the democratic rights of people to peacefully protest the action or policy of the government. But everything took a sinister turn when the higher level officer arrived at the scene.  He ordered the clearance of path, and suddenly the police started using the baton and water canon against the hundreds of youth protestors. Eight of them were arrested and later released.

One post in facebook lamented the devious police brutality. The father wrote about his daughter who had joined them after three months of isolation but insisted in joining the protest:

“She is an empathy who cares enough to make a change. Today she returned home with bruises, missing glasses, holes in her clothes, minor cuts and was having trouble breathing. Despite this she didn’t have an ounce of resentment and had a positive outlook towards the whole experience.” 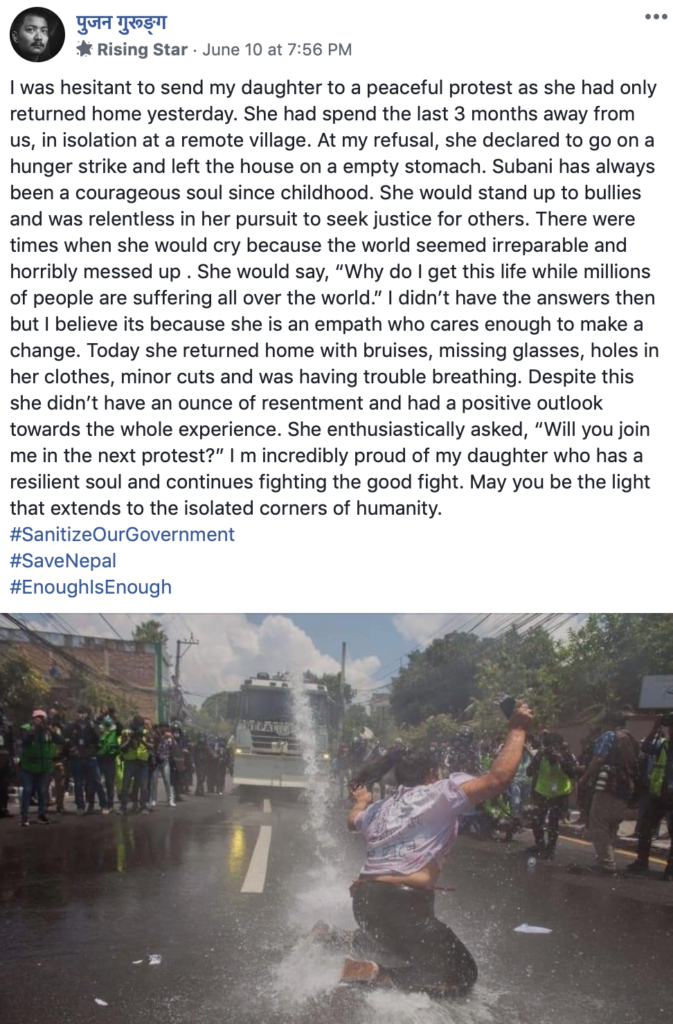 This could be only the beginning of protests what is bound to get bigger and fiercer. Police have been more coercive than cooperative towards everything.

There has been another political issue that has riled people up. In the parliament, Hindi has been spoken and direct challenge to Nepal government and people has been issued regarding the hot issue of Kalapani and Lipulek. Statements are coming in interviews in media to diminish Nepal’s status and even existence. All this effort to undermine Nepal in front of India is definitely not sitting well with the population. This could also become another flint stone. The leading activist of Greater Nepal Fanindra Neupane has stated that he will lead the charge to remove Sarita Giri from the legislature. Another youth crowd already surrounded her home and destroyed the gate.

The most burning issue, however remains to be MCC.  People against MCC are also waiting for the opportunity to show their displeasure. It is likely that all the dissatisfaction could add up to cause a major revolution in Nepal as soon as the lockdown ends or even if it is kept in place.

The situation is like a tinder box, and any of the incidents mentioned above could be the flint to burn down this republic with federalist system.