Do you have a favorite month? I suppose you do. Most people cherish the month of their birth, or some other event.

I am an exception, in that regard. I love Asar, the third month in the Nepalese calendar. There are few things distinctly attributed to only Asar. For one, Asar means “Dhan Diwas”, the day for rice planting all over Nepal, enhanced by special food for the day, “Dahi chiura.” Fifteenth of Asar is the newly created national festival celebrating the planting of rice, the staple diet of most Nepalese. This is supposed to be the day that feeds the whole country. Obviously such a day and a new festival mean an added attraction for the tourists. Not surprisingly, the tourism sector has embraced it with much gusto. We can now anticipate pictures of tourists in muddy paddies in the  social media and news outlet. What a blessed time and a national day of merriment!

Joyful as the Asar Monsoon may be, it has just the opposite cultural trait as well.

I remember a popular folk song from my childhood that gave vent to the poignant and heart-wrenching socio-economic plight of average and lower strata Nepalese.  It was a viral song before there was social media. The song might have given birth to other songs of similar nature, but the song highlights the situation of Nepal even now. That song was

The recently viral song might have been inspired by that oldie where both of them share the theme of separated family. They render grievous nature of Nepalese destiny to become international labors, and thereby spend their life pining for simple happiness of being with their family, from some foreign land. That new twist came in the song:

So, just like the nature sheds its tears in a Monsoon torrent in the month of Asar, Nepalese can relate to their heartfelt desire and pain of separation during the Asar month watching or imagining the downpour of nature as a metaphor for their sorry fate.

The most important reason Asar reigns in my heart as the king of the months is the tremendous development that occurs in this month. And, I am a big development fan.  This is the month that Nepalese prove to the world, anything is possible. Just tune in to the news this month, everywhere in Nepal, development projects are carried out and completed like nowhere else in the world.  Within the end of this month, roads get paved, gravels are dumped, drains and channels are dug, and cemented, and what not. Even as I write this news from Biratnagar says that road and drainage construction are taking place at a breakneck speed. Such achievements are credited to the Japanese brothers. I have a nagging suspicion whether some Japanese engineer had visited Nepal in Asar in the past and been inspired.

Rain or shine, day or night, nothing can stop the development work in Nepal in the month of Asar.  Roads are tarred, holes are filled, and you might not believe this– official meetings and workshops spike during this month as there is no death of fund with the government. The problem in Asar is how to spend the money, unlike other months, when the main problem will be how to allocate or find the money. So, you see, Asar is the month of development in Nepal. Things really get done. I can even make a bold claim that if there was no Asar, there would be no development in Nepal at all. 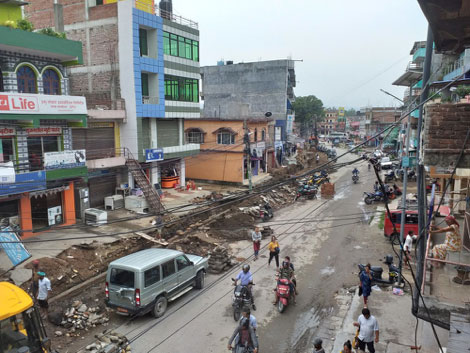 So, as you enjoy the respite from the scorching heat of Nepal’s summer, let’s be glad for being able to sing the song of our heart and offer prayer of thanks to the God and Government for the development. Nepalese can thank their good fortune for bring born in this Shangri-La.  Really, we could be the envy of the world, just because of Asar. Why not just have few more Asars in a year? If we could, there is no doubt we could settle on Mars before Elon Musk.