Strife in Nepal and the Prayer for a Silver Lining

by Nepalisite 11 years ago5 years ago

“Strife in Nepal and the Prayer for a Silver Lining” by Karma Tenzing Nyangmi.

“War is a continuation of politics by any other means” – Von Calusewitz.

No more second thoughts regarding the matter but I believe Nepal to be a failed state and may God help her!  On reading about the issue on every Nepali daily and coming across regular pictures of riots going on there, Kubler-Ross’ “Five Stages of Grief” is the only thing that crosses my mind (this is akin to a Karmic cycle that seems to repeat itself in Nepal every five years or so):

1. Denial: We’ve passed this stage that was prolonged ever since the Maoists came into power.  The Rubicon was crossed a while ago!

2. Anger: This is the current state we’re in.  The public continue pounding the streets everyday and destroying whatever little infrastructure we have…They’re stilll oblivious to the fact that the archaic and dying old ways of living amidst the modern revolution has it’s days numbered.

3. Bargaining: The next stage where we hope the “netas” and their cronies can come to an agreement that befits us all to an era of peace (albeit this period of peace is going to be a temporary one looking at the past historical performances – Technical Analysts in Finance will smirk at this reference).

4. Depression: Like in the past few times (after the bargaining stage), this time too, there will be regrets and the “what-if” question will arise among the “netas”…These sycophants and brutal psychopaths who have no moral issues sacrificing a thousand innocent civilians at the altars of hell will not stop in their quest for greed and personal recognition!  The public now too weary for another war and as proven in years past, will end up seeing political parties scuffle amongst themselves yet again.

5. Acceptance: Finally, with the acceptance of the chaos and the view that things will remain unchanged, the conclusion comes about (as in the past) that Nepal is indeed a failed state and things are just better left as is.  And just as we’ve begun to accept the inevitable, things do eventually get better (to reiterate: Temporarily that is)…Until the Kubler-Ross model plays out again!

It’s too late for God but I hope the people of Nepal can put aside their petty differences, stand in solidarity, do peaceful marches against the “bandhs” and other negativity that is making things far worse for a majority of the civilians who live on a day-to-day basis.  The protestors and strife-mongers who have nothing better to do, need to realize that the Nation needs them now (more than ever before) and their hate based on caste/creed/race is nothing but ignorance at it’s zenith…We’re 7,000 years past the Stone Age folks! 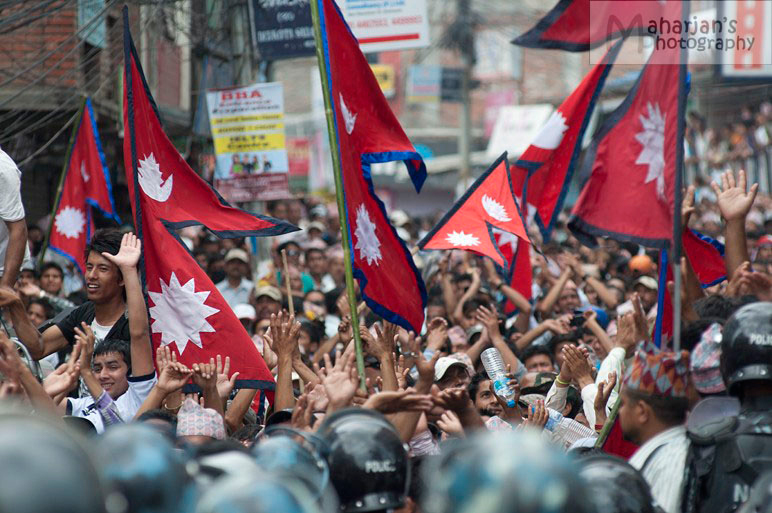 The Silver Lining: As in many things in life, a message of hope can work to change some of the perceived issues we have going on for the better.  The message that needs to be spread by the Nepalese media and us all is that this is a transitional phase in history that we’ve seen many nations been through, survive it and ultimately rebound from it.

We had the Arab Spring that did away with despots, the Kyrgyzstani uprising that took out the incumbent in power, the riots in Bangkok and the current Greek crisis that is going to change the face of the Euro Zone’s socio-economic policies forever.  These were and still are BIG issues that are on the verge of being resolved diplomatically after the initial bloodbath on the streets.

Yes, not what we in Nepal want to hear but at times we need to go through years of war to have decades of peace…The necessary evil exists and it’s how you as an individual perceive it and deal in overcoming it.  The only difference, the issue this time is closer to home (in fact, at home!)!  We, the Nepalese civilians will be knocked and tossed around but we need to stand up every time we fall (and believe me, it will be a lot).  And each time upon rising, come up stronger and cement the realization onto those ignoramus’ who are filled with hate that in the end, humanity and the “ekta” in us being a “Nepali” is what will get us through. 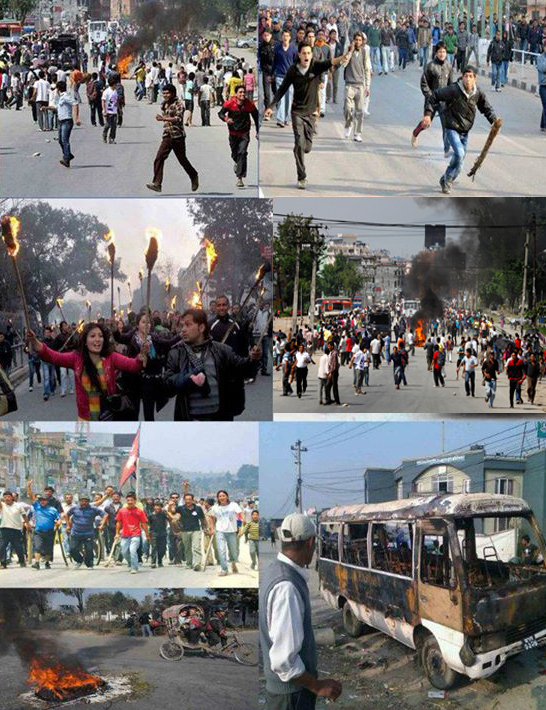