According to investigative report of 2018, 170 court cases against road expansion from all over Nepal were pending in the Supreme Court.  They were filed by the people against the government against usurping of their property in the name of highway construction, mostly expansion. This kind of problem exists because none of the cities are planned; hence current crisis is natural outcome of lack of vision in our development and urbanization. Scientific thinking and long-term planning are non-existent.  Even in a modern settlement like Hetauda, there are hardly any four-lane operational roads in the city. There is no concept of zoning so the result – no parking lots, no industrial, business or residential zones. Back in the Panchayat era, Mayor Nir Shankar Shrestha had actually allocated a planned residential area.  That has not been sustained either. 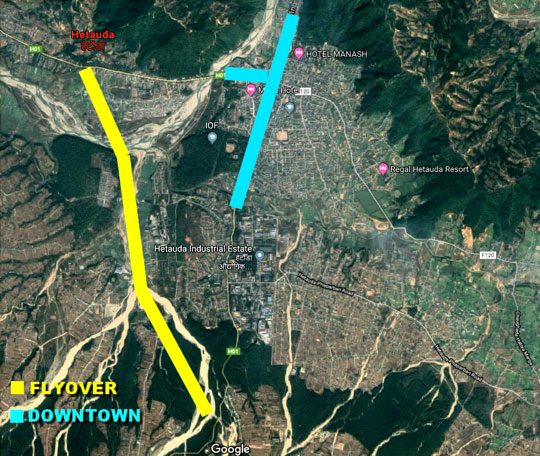 For the people of Hetauda, Central Nepal, all you have to announce is “25 meters” and you could witness horror in the faces of the residents there.  The implementation  impact of “25 meters” could in effect wipe out the town of Hetauda.

Hetauda is a small town in the Doon area of central Nepal. It was one of the first places to have a national highway in the country. Tribhuwan Highway completed in 1956 with Indian assistance connected Birgunj, the main entry point from India, to capital Kathmandu, thus facilitating trade to such a degree that Birgunj is still the main port of entry for all goods to the capital.

The city grew around the main highway, which was two lanes at the time. As the rural settlement has turned into a small urban area with the downtown developed along the 2-3 km stretch of the highway, traffic has increased. Currently there is traffic problem hindering the flow of vehicles, while accidents have kept up the pace with increased traffic. Since this highway was included into Asian Highway, thus needing it to expand to four lanes, the highway had to expand to 50 meters width, 25 meters from the center on both sides. What this means is that structures on both sides have to be destroyed to build the highway. In the past, the road division issued notice for homeowners to either destroy their own homes, or the department would take the matter into their own hands. In 2017, they actually started demolishing the houses until the Supreme Court issued a Stay order and everything stalled until now.

Now there is a majority government, and the ruling party is also controlling the State house. The Provincial Chief has his own house within the widening zone so there is a personal angle to this disaster. He seemed to favor widening to 16 meters earlier, instead of 25, but he is wavering on the issue. There is also a matter of compensation for the property that will be taken by the government. There are complexities entangled in this construction project. Some people associate widening the road to ”development.” Those who oppose and give alternate solution are anti-development.

The crux of the matter is that most of these debates and ideas center around how much destruction to inflict on the community.  They have not seriously considered long-term impact, immediate consequences of the move, or the more viable alternative. For that, the need is for out of the box thinking. That is not easy to come in a backward place like Hetauda.

What could be better?

Two fundamental questions need to be answered that relates to this problem: 1) meaning of development, and 2) purpose of government.

On development, we can easily prove that widening roads will not result in solving congestion. It needs better traffic law, road design and proper management of vehicles with more scientific approach. These are the things lacking in Hetauda. Needless to mention that there is not even appropriately designed parking space in the city, nor are there any plan to make parking space available for various facilities. People park on the pavement, side of the road, or even in haphazard manner on any vacant lot.  Drivers do not follow traffic rules at any time. It is running on the jungle law of might is right, so bigger vehicles bully on the smaller ones. Hence many trippers have killed motorbike riders.  Pavements are being used for parking in the city, so pedestrian have to get out of their rightful area into the streets for smoother travel for shopping. The whole situation about traffic in Nepal is a big mess. Many side lanes have been improved, the problem has gotten worse because the roads are immediately used for parking of vehicles. Most of the homes or shops have no parking so public spaces serve as their parking too.  Blaming traffic jam and accidents on narrow roads is a simplistic understanding, and leads to an unnerving solution.  First roads meant development, not wider roads are supposed to be development, not realizing that proper planning should be the first criteria for anything.

Secondly, roads are meant to serve man, not the other way around.  It is for people’s affairs that everything else is brought into their lives. People need to travel for personal and business reasons. Hence the roads need to serve that purpose. It makes no sense that a whole city will be wiped out just because roads need to be widened.  It makes no sense.

Most importantly, Hetauda downtown is also a living monument for historical sentiments and preserver of its heritage. This is the street that has seen blood during the political revolutions in the past. This 2-3 km stretch has functioned as the life blood of Hetauda. Preserving it has far more significance.  The downtown area is where the first settlers started seeding the growth of this city. Even the old decrepit houses tell us the story of an era when the rhinos, tigers and serpents ran rampant.

The approach to solve it should be holistic. First thing needed is for the concerned government should envision Hetauda in 100 years and develop an urbanization plan with proper zoning and economic activities. Hetauda has been dishonestly upgraded into sub-metropolitan city by merging peripheral villages without decent amenities that are supposed to be requisites of a metropolis. Its education, healthy, entertainment and social sector can be said to be subpar at best. Intellectualism is non-existent.

So the choice is whether to continue in the same ad hoc manner of growth, that will led to destruction of 700 homes and shops with no means to relocate anywhere. That means migration to other location and result in flight of capital and business entities. What would be worse than the destruction of homes and properties would be at least two decades of living in hell created by the dust and debris of destruction and reconstruction of the road. These questions have not been considered: 1) Where will all the debris be dumped? 2) Will they cut all the trees planted on the sides decades ago and form an iconic downtown landmark of Hetauda? 3)Will they destroy the drainage system and construct new ones? 4) The most challenging one, not the least at all, will be how will they handle the power grid with the old cement poles that would have to be completely relocated? These will be nightmare for the construction companies who have not even carried out simple projects on time or under cost.

Related: Warning by Business community against Highway Expansion in Hetauda

For the rest of the population, pollution will be rampant as the site is currently the main thoroughfare of the community.  The price will be lives destroyed, history erased, and city wiped off the map.  Then there would be immense compensations that would have to be disbursed. Just as an aside, talking about 25 meters highway, another highway in news these days is the Kanti Lok Marg. It has a new completion date now, after Dashain festival. What is important to note about this highway in relation to the current 25 meter plan is that Kanti Lok Marg was started 63 years ago. So, what the politicians tell and what actually happens has no relevance, no credibility and no authority. This should be noted by the residents of Hetauda.

Alternately, all that can be avoided and heritage and history maintained and take the first step to modern, organized development based on arterial 4-6 lane highways in the newly integrated undeveloped land. None of the city dwellers would have to go through pain of so called development.

The choice is clear, but without a vision it is hard to see.